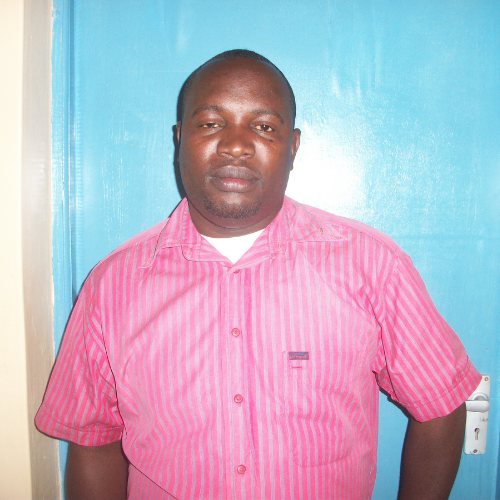 Nicholas (Nick) Omondi was born and raised in the Mathare Slum in Nairobi, Kenya. His parents died when he was only eleven, leaving him and his two siblings to fend for themselves in the slums. Unfortunately, his sister died shortly afterward. With the help of his street family, Nick and his brother buried her in a nearby forest and planted a tree above her grave, giving name to the future orphanage, the Treehouse. Nick was able to complete his secondary education. After graduation, he took a job working in construction. One day Nick cut his hand on a sharp object. A friend removed the splinter but mistakenly left a portion of it inside his flesh. Three days later, Nick was unable to go to work because he was in tremendous pain. A week later, his entire limb was so swollen that he was not even able to wear a long-sleeved shirt. The doctor wanted to amputate his arm in order to prevent the infection from spreading, but Nick refused to undergo the surgery. He suffered for 7 months but his arm eventually healed with no permanent damage other than to his pinky finger. Nick knew that there was a reason he underwent this experience. He felt called to help other people suffering in his community, and he founded the Community Transformers (CT). The slums are heavily populated with people affected with HIV/AIDs. One of the main missions of CT is to provide support for those who have been infected with HIV/AIDs and/or have family members that are affected.

The other goal of CT is to care for orphans and vulnerable children living in the slum. When Nick started his outreach work, he did not have plans to build an orphanage. He started by reaching out to kids that reminded him of himself. He started simply by providing shelter. He had such a connection with the few kids that he eventually made it possible to provide food and education. Although it was a struggle, he knew that he finally found his purpose. Word eventually got out—more and more kids started coming to Nick. Eventually, the Treehouse Orphanage was formed. Community Transformers has been recognized as one of the best youth-led community organization in the Nairobi area. Nicholas leads an amazing group of staff and volunteers, and together they have been able to provide home-based care for 400 individuals living with HIV/AIDS, run weekly HIV/AIDS support groups which benefit 105 people, and care for 36 orphans living at the Treehouse Orphanage. In addition, they have rescued 250 children living on the streets and helped to reunite them with family members or referred them to other children’s homes.