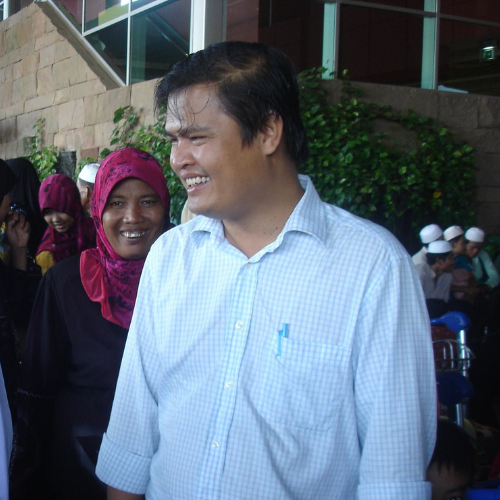 Born into a minority Muslim Cham family, Osman Ysa has overcome massive obstacles to reach his place in the world today. When he was just 1 year old, the Khmer Rouge invaded his village. Persecuted under the regime, a Cham rebellion ended in defeat, leaving hundreds dead including many in Osman’s family. Those who survived were forcibly deported to relocation camps where many died of starvation. In December 1978, following liberation by the Vietnamese, they were allowed to return to their home village. The long journey took two months on foot, and land mine explosions killed many people on the way. When Osman finally arrived home to Svay Khleang, he found the village in ruins. In total, only 120 families had survived out of the 1,240. As the community started to rebuild, they were finally able to open a two classroom school in 1981. More than two hundred children showed up every day, eager to learn. Osman studied hard, completed high school and went to Phnom Penh to continue his education. He returned home and became Executive Director of the Community Connection Cambodia (CCC), an organization committed to providing vocational training to Cham students so that they have a means to support themselves and their families.

GO Campaign partnered with Osman and CCC to help establish a vocational training school for computer literacy and English that will serve 1,080 Cham students annually. An author and researcher, Osman’s published findings are bringing greater understanding of the history, plight and status of the Cham. He is passionate about preserving the history of his people, ensuring their well-being and helping them develop skills for a bright future while documenting the rich history of the Cham in Cambodia. Osman is determined to see the growing population of Cham youth have new opportunities to prosper.