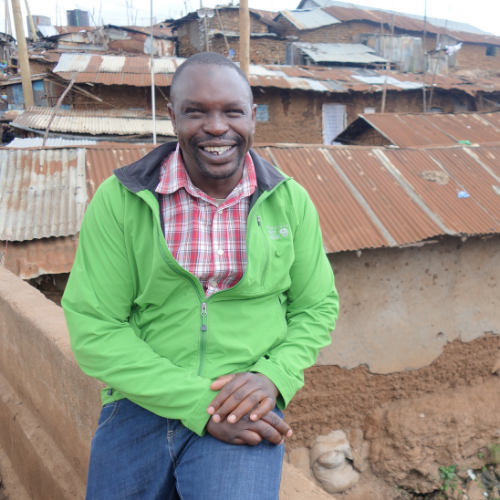 Abdul's mission is to eradicate the extreme gender inequalities in Kibera because he believes that educating girls not only improves their lives but has a positive ripple effect in the larger community and future generations.

Abdul Kassim, has been a Kibera resident his entire life. Growing up and being raised solely by women, he was conscience of the extreme gender inequalities prevalent in the slums. Wanting to create a more equitable world for his daughter, he started to work to change the misconceptions about girls and their abilities. In 2002, Abdul started a girls’ soccer team. The team excelled and was able to compete on par with their male peers. Though successful, Abdul realized more needed to be done to improve the quality of life for girls in Kibera so he started a school in 2006. Today, Kibera Girls Soccer Academy (KGSA) has 20 full-time staff, over 130 students, and several artistic and athletic programs. Their hope is to inspire young women in Kibera to become advocates for a change within their own and the larger Kenyan community.

Kibera Girls Soccer Academy (KGSA) has expanded to meet the growing needs of the girls in Kibera. In addition to their top-performing school program, they run clubs in soccer, journalism, debate, drama, and science. They also provide scholarships to girls so they can continue their education post secondary school as well as provide small business loans to girls interested in establishing a business to support themselves. And in July 2021 the school opened a live-in dormitory to allow 40 girls to live and study with each other in a safe and focused environment. Since it opened, KGSA has directly helped over 1,300 girls and has graduated over 340 students, with 60 going on to higher education either pursuing vocational school, an associate’s degree or a four year university program. KGSA continues to facilitate the holistic education of around 130 girls every year, and hopes to expand the dormitory to allow all of them to reside there.