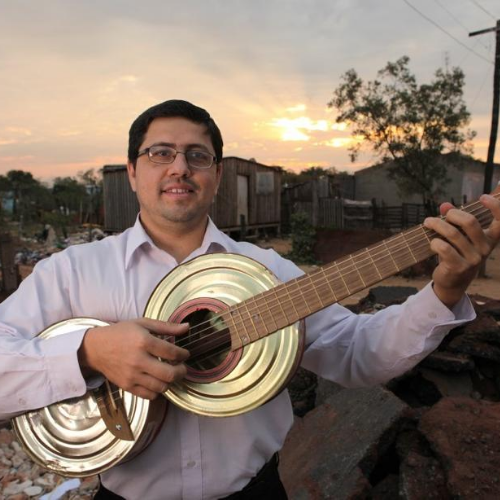 “The world gives us trash, we give them back music!” – Favio Chávez, Director
A true visionary, Favio takes the world’s trash and gives back music, and demonstrates that despite extreme poverty, one can transform a community and inspire the world.

Favio’s mission is to transform the lives of the children of Cateura through music and motivate public action to address global issues of extreme poverty. While working as an ecological technician at the Cateura Landfill, the largest garbage dump of Paraguay’s capital Asunción, Favio Chávez got to know and befriended some of the 2,500 impoverished families who lived at the garbage dump working as recyclers. Witnessing the rampant illiteracy, extreme poverty, pollution and surrounding culture of drugs and gangs, Chávez became acutely aware that the children needed something positive in their lives – something to keep them out of the landfill and striving for something more.

Favio, having previously been a music teacher, decided to share his love of music with the children, and he began teaching music lessons using the handful of personal instruments he owned. He quickly realized there weren’t enough instruments for all the eager students wanting to learn. With help from one of the trash pickers, he started experimenting with making instruments with the given resources. Using scraps of dirty oil cans, jars, wood, forks and other junk in the Cateura landfill, the instruments began to take shape and become finely tuned musical instruments - violins, flutes, cellos, drums…all made from trash. From this ingenuity, the “Recycled Orchestra” was formed with the local children as its members learning and performing Bach, Mozart and Beethoven. By taking the world’s trash and giving back music, Favio aims to not only raise public awareness of a global issue but also demonstrate that despite extreme poverty, students can become contributing members of the community. The orchestra has breathed new life into the community and is providing the children with new opportunities for a future they never imagined possible.

Favio and his students were featured on 60 Minutes on CBS in a documentary called, "The Recyclers: From Trash Comes Triumph" and in the film "Landfill Harmonic."